On October 23, a crowd of more than 300 energized scholars, university representatives, ARCS members and guests gathered at the Julia Morgan Ballroom at 465 California Street to celebrate:

There was palpable energy, intense networking, and “good vibes” during the reception. Our honorary chairs – Linda Dyer Millard and Jill H. Kramer – both ARCS members for more than 30 years (Emeritae) - were gracious ambassadors, inspiring all members and guests with their continued commitment to supporting graduate education in STEM disciplines.

The program included informative remarks by Janet Reilly as MC, an inspired panel of three ARCS scholars in bioengineering (Karsyn Bailey, Bryan Thornlow, and Jesse Zhang) moderated by Professor and Chair of Bioengineering at UCSF, Tejal Desai. What a great introduction to the importance of bringing together the problem-solving discipline of engineering into clinical issues at the genetic, single cell function, and orthopedic levels. They all emphasized the value of interdisciplinary collaborations that will contribute to precision medicines of the future.

The Pacesetter Award was presented to Dick and Pam Kramlich – the first time a couple has received this award – for their contributions in technology, science, and the arts – putting the “A” in “STEM” to make “STEAM”. Dick was a Co-Founder of New Enterprise Ventures (NEA) and Pam is a graduate in Art History from UC Berkeley. Both appeared to be delighted to be recognized and spoke about their partnership and support of science, technology and the arts.

The Distinguished Alum Award was presented to Dr. Jennifer Garrison, Associate Professor at the Buck Institute for Research on Aging. She received her award from ARCS as a graduate student in biological chemistry at UCSF. She used part of the award to buy her first laptop computer – something that was a luxury at the time. Her remarks included the statement: “I have the best job in the world – I get to think science, do science, and teach science – every single day.”

All agreed: it was a fabulous 2019 Scholar Awards Celebration! We send huge thanks (5 STARS) to the Co-Chairs, Deborah Mann and Katy Hope. 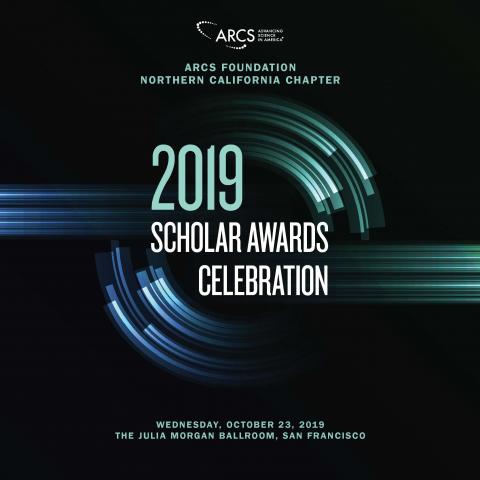