An Affair to Remember – Celebrating the Minds of the Future – April 28th, 2022

In an iconic San Francisco venue, the Palace of Fine Arts, the Northern California Chapter of ARCS Foundation will be combining its annual Symposium and Scholar Awards Celebration into a commemorative experience as we move into our 52nd year. Attendees can look forward to engaging with over 75 scholars from six universities through their research presentations along “scholar row” and stimulating roundtables -- all within a historic venue for exhibitions.

The Palace of Fine Arts was one of ten palaces at the heart of the 1915 Panama-Pacific Exhibition and was designed by Bernard Maybeck, who was tasked with creating a building that would serve as a quiet zone that exhibition attendees could pass through between visiting the crowded fairgrounds and viewing the paintings and sculptures displayed in the building behind the rotunda. Maybeck designed what was essentially a fictional ruin from another time, taking his inspiration from Roman and ancient Greek architecture. The Palace was so beloved that a Palace Preservation League, founded by Phoebe Apperson Hearst, was founded while the fair was still in progress.

The Palace of Fine Arts’ lagoon is intended to echo those found in classical settings in Europe, where the expanse of water provides a mirror surface to reflect the grand buildings and an undisturbed vista to appreciate them from a distance. Ornamentation includes weeping women atop the colonnade, sculptured frieze, and allegorical figures representing Contemplation, Wonderment, and Meditation. In this setting, we invite you to join us as we celebrate our scholars and their research and meet and mingle during a convivial and interesting reception, followed by a celebratory dinner. 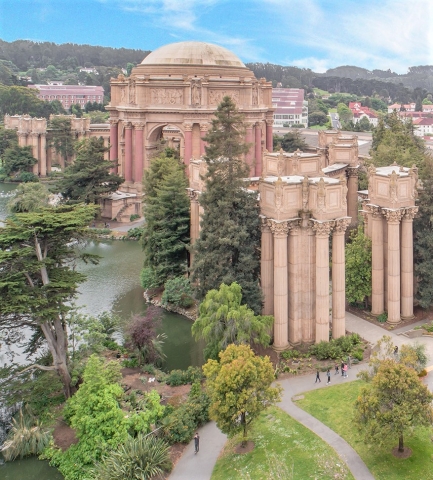