In the department of Astronomy and Astrophysics at UC Santa Cruz, Dave specializes in searching for the visible-light counterparts to gravitational wave sources. He was a critical part of the team that discovered the first-ever such counterpart in 2017: a "kilonova" created by the merger of two neutron stars. This discovery was featured on the cover of Science as the "2017 Breakthrough of the Year," and continues to have an enormous impact on the field.

In Dave’s own words, “The discovery was really the culmination of many efforts that suddenly clicked into place at the right place and at the right time. For years I had worked as a software engineer, and leveraging those skills, I was able to build out the technical infrastructure to make such a discovery possible. Not only did I have a hand in building our research group's computer server (which is where we would analyze the data), but I wrote the code on the telescope in Chile to automate sending us the data in real-time, and also built the algorithms to combine galaxy catalogs with the information from gravitational wave detectors on Earth to effectively reduce the search area. Our team was spread around the world -- we had telescope operators in Chile, postdocs, and grads in Santa Cruz, and a few students and my advisor and I in Copenhagen, Denmark -- and we had been up for days prior to the discovery chasing a few other events that never panned out. However, going through the "fire drill" several times before the discovery put us in the right mindset and in the right position. It felt like being a storm chaser: suddenly I received an automated text message that there's an event in deep space, and everyone gets to work. In fact, I was at a conference studying gravitational waves and so I knew something big was happening when everyone in the lecture hall had their phones going off! In that excitement we worked tirelessly to plan our observations; we had nearly 12 hours to burn before night fell in South America. The universe didn't disappoint and the explosion was in a nearby galaxy with a view unobstructed by our own galaxy. Our algorithms worked beautifully and we imaged the transient on our 9th exposure, quickly disseminating the position to the astronomical community within minutes of nightfall in Chile.

We did something no one thought was possible: using only a 1-meter telescope, and by being quick and nimble and with a relatively simple algorithm, we beat out much bigger teams with much bigger telescopes. The David and Goliath story is only enhanced with how much science was enabled by finding the counterpart. For decades, the debate on the origin of heavy elements, and the nature of short gamma-ray bursts had been assumed to be connected to merging neutron stars, and with our discovery, those theories were confirmed. Topics as diverse as constraining just how dense matter can get to measuring the local expansion rate of the universe were enabled by this discovery, so the race is on to find the next one!”

Dave is a father of two, loves to cook, and is an avid sailor. He has a particularly personal story to tell about the impact of his ARCS award: “This gift came at an extraordinary time for me and my family. Living in Santa Cruz, in late August and early September 2020 we were displaced from our home by the CZU Lightning Complex fires. My wife, who was nine months pregnant and two weeks from delivery, and my 2-year-old daughter and I, had to leave with a backpack each and as much as we could fit in our car. Our power had been out for days, it was a record heatwave in California, and on the morning of our departure, the sky was a sulfur yellow and was raining ash. Already gravely concerned about the conditions around us, our fear was heightened because we were uncertain about where to go, when we could return, and with only two weeks before my wife's due date, where to deliver and where she could comfortably convalesce and be safe from COVID-19. We eventually found a temporary rental house in Portland, OR for the month of September and she gave an uncomplicated birth to our beautiful baby daughter Zoe. Unfortunately, life wasn't done handing out challenges, and shortly after the birth my father suddenly passed away from a heart attack complicated by the smoke and ash that had been choking the air all the way up to Washington State. With impossible grace, my wife took over caring for our infant and toddler by herself while I made a trip to my mother's to help with the arrangements. Finally, on the way back to Santa Cruz, our family car died -- totaled by a burned-out catalytic converter. We returned as inauspiciously as we left, being towed in the dead of night back to our home that was left in disarray by our whirlwind escape.

The reason why I feel compelled to talk about these personal hardships is that I really don't know if I could have mentally or emotionally survived them without the knowledge that I had imminent support coming from the ARCS Foundation … The spirit of what I wanted to accomplish with the ARCS award, to support my family so that I could focus on my research, is exactly what I have accomplished with your support. Quite frankly, this gift effectively halted our freefall, and now that my family is back home with our new addition and without that burden of intense anxiety, panic, and grief, I have finally started to refocus on my science. It's extraordinary that with all of the hardships and tragedies we faced down here on Earth, I have been blessed by your organization to be able to both support my family and to return to looking up and studying the most extreme and exciting environments in the Universe -- the sites of the mergers between black holes and neutron stars -- without skipping much of a beat. I am truly grateful for this opportunity -- thank you all again so much for your generosity and support.” 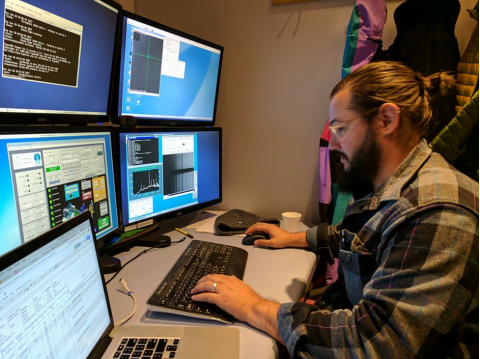